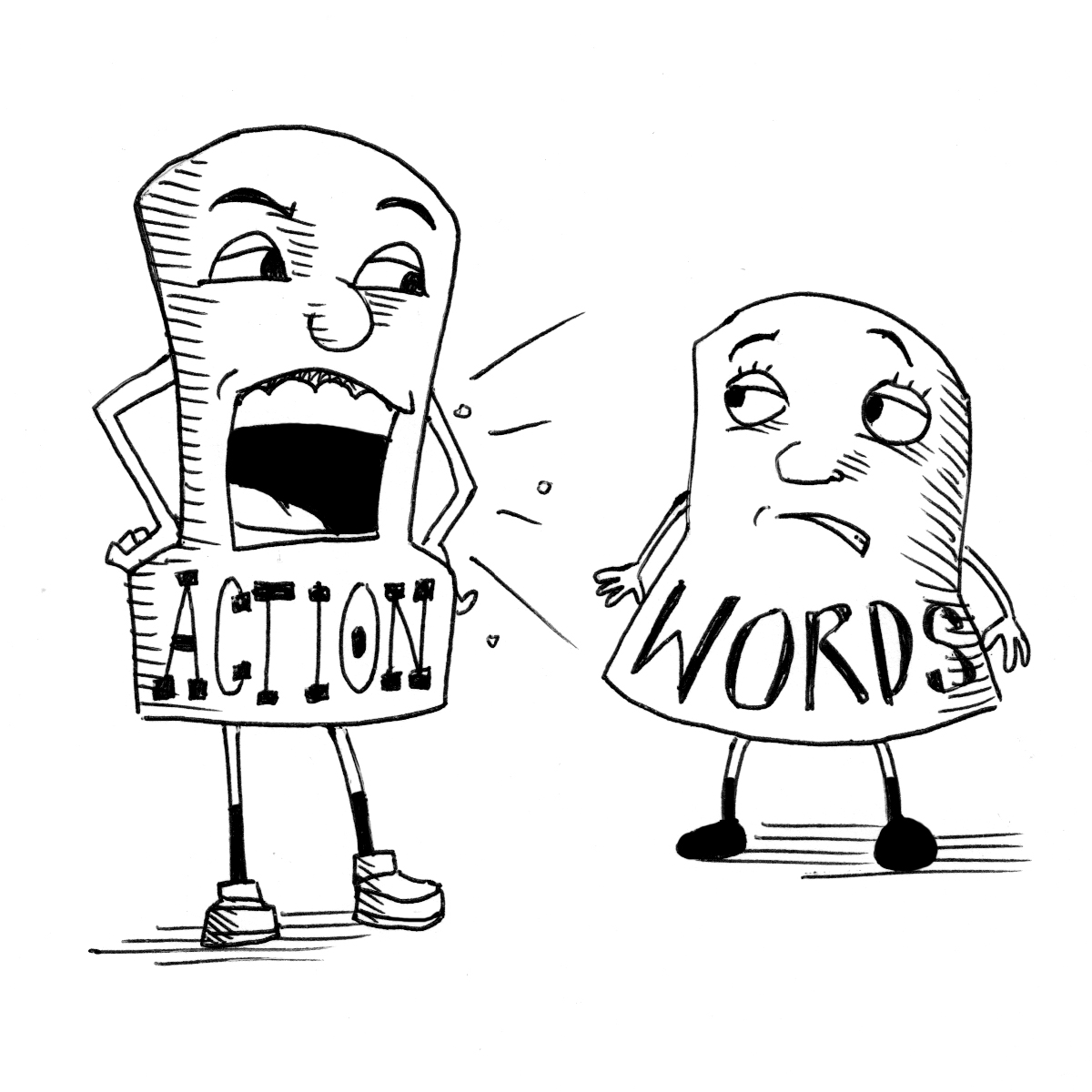 “Actions proves who someone is. Words prove who they want to be.”

“Action speak louder than words. We can apologize over and over again but, if are actions don’t change then our words become meaningless.”

Why people say one thing and do something totally different? Is someone allowed to make announcements of their plans/dreams or what they’re passionate about? Should someone complain about life? Why say more than do? And Should you be a follower or a leader?
The last question seems odd to ask since we’re talking about “actions speak louder than words” but, becoming a leader or a follower has something to do with actions speak louder than words. It’s simple as you decide who you want to become in life. It goes back to what I wrote in my previous post “You Have to Make A Decision”. Once you’ve made a decision about your life then you’ve made up your mind of how your life should be. However, if you’ve decide what to do with your life and do not go by what you’ve decided then you’ve already wasted time and energy on yourself. Being a leader is taking charge of your life, you don’t sit and have a wishful thinking of what you want in life because it is what you need in life, so chase after your success. Everyone wants to be a leader but, not everyone can be a leader because of fear. Fear can take charge of your actions, fear can stop you from any kind of success or opportunities because you’re blocking any blessings coming your way. So, most people is stuck in a bubble to say more than to do more.
Most people would say one thing and do another because of fear. If I say building beautiful&bold was a piece of cake and deciding to become a blogger was a piece of a cake that would be a lie. I always said one day I will have my own website or one day I’ll be a blogger but, my actions says otherwise because I’m use to saying one day but, I am happy I put my fear to the side and went for it because It’s part of my vision. I was a lot worried about others opinion instead of thinking of myself but, I realized if you’ve talk more than what you’re doing then you’ve wasted time and energy on yourself. I’ve learned the more you speak of it, the more it’ll be a habit for you.
So, Why people say one thing and do something totally different? I don’t know about everyone in the world because for some, that’s who they are to at one thing and do another but, I recommend you do not want to be that kind of person who says more than what they do but, I know fear can work it’s way from anyone to put into work and never let fear do that to you. Is it okay to make announcements about your plans/dreams or your vision? Do whatever makes you happy but, never say things to make others happy, make yourself happier. Should someone complain about life? No, and I’ve complain about life plenty of times(who hasn’t, everyone has complained about their life) but, we
should stay focus on how blessed we are and not our situation. If you don’t like something- change it or make it happen so that your life can change for the better. Should you be a follower or a leader? I’ll let you decide because the only person that you can be is YOU, so be YOU. Which means be a leader, so act like a leader of your life and not a follower of others. The only person who you should follow in life is God. Always go by this do less talking than more doing because that way you won’t have to say who you are, it is shown by your actions of who you are and who are: